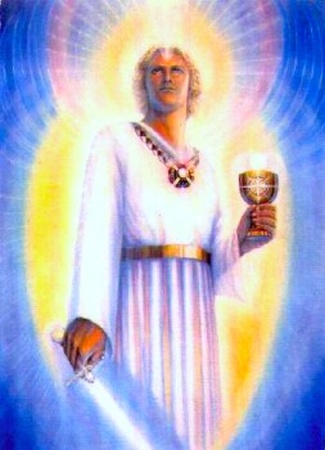 Also known as Beshter, Mika'il, Sabbathiel, Saint Michael.
Michael's name means "he who is like God" or "he who looks like God." Archangel Michael is a leader among archangels. He's in charge of the order of angels known as "the Virtues," and he oversees the lightworker's life purpose. His chief function is to rid the earth and its inhabitants of the toxins associated with fear. The humans whom he enlists and works with are called "lightworkers," and Michael asks them to perform spiritual teaching and healing work on a professional or casual basis.

Michael has inspired leaders and lightworkers since his time in the Garden of Eden, where he taught Adam how to farm and care for his family. Joan of Arc told her inquisitors that it was the Archangel Michael who gave her the impetus and courage to lead France during the Hundred Years' War. In 1950, he was canonized as Saint Michael, "the Patron of Police Officers," because he helps with heroic deeds and bravery.

Archangel Michael is extremely tall and handsome, and he usually carries a sword, which he uses to release us from the snare of fear. When he's around, you may see sparkles or flashes of bright blue or purple light. Michael is a fiery energy, and his presence is enough to make you sweat. I've had a number of female students tell me that they thought they were having menopausal hot flashes until they realized they'd just invoked Michael, and it was his presence creating all the heat!

Michael also has an incredible knack for fixing electrical and mechanical devices, including computers. I've called on him a number of times to help me with errant telephones, fax machines, and types of electronics, and he always comes through. A student of mine even invoked him when she was fixing a friend's plumbing (something she knew nothing about, but offered to do because she had faith that she could figure it out). As soon as this woman called Michael, the plumbing seemed to fix itself, and the operation was completed in no time!

Michael guides and directs those who feel lost, or stuck with respect to their life's purpose or career path. He can stimulate the unmotivated or fearful into action. Michael also provides clear guidance about which step to take next.


Call upon Michael whenever you feel afraid or vulnerable. He will instantly come to your side, lending you courage and ensuring your safety, both physically and emotionally. You'll feel his warrior-like presence next to you in much the same way that a loving bodyguard would protect you. Anyone who might have intended to harm you will have a change of mind or heart.

Michael doesn't require that you say a formal invocation, and he will come to anyone who calls upon him. For example, you could think the thought:

"Archangel Michael, please come to me now. I need your help!"

Then mentally describe the situation with which you need assistance. As stated earlier, you'll know he's with you when you sense his characteristic warm energy.

"Archangel Michael, please come to me now. I need your help!"